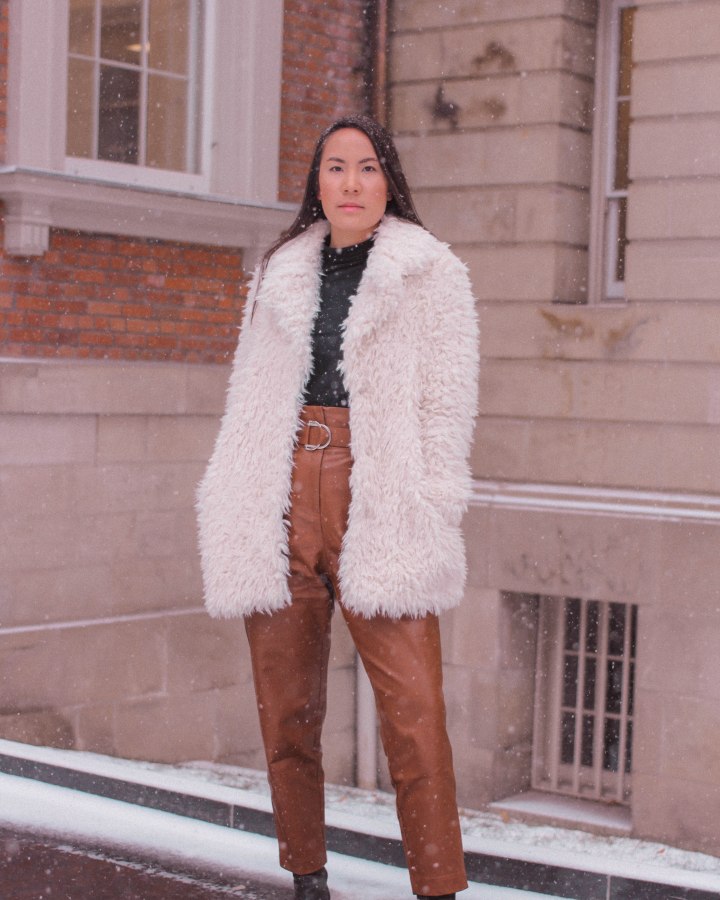 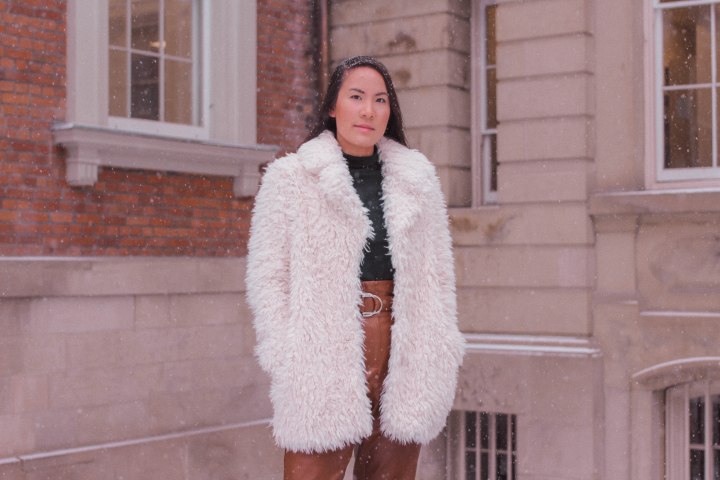 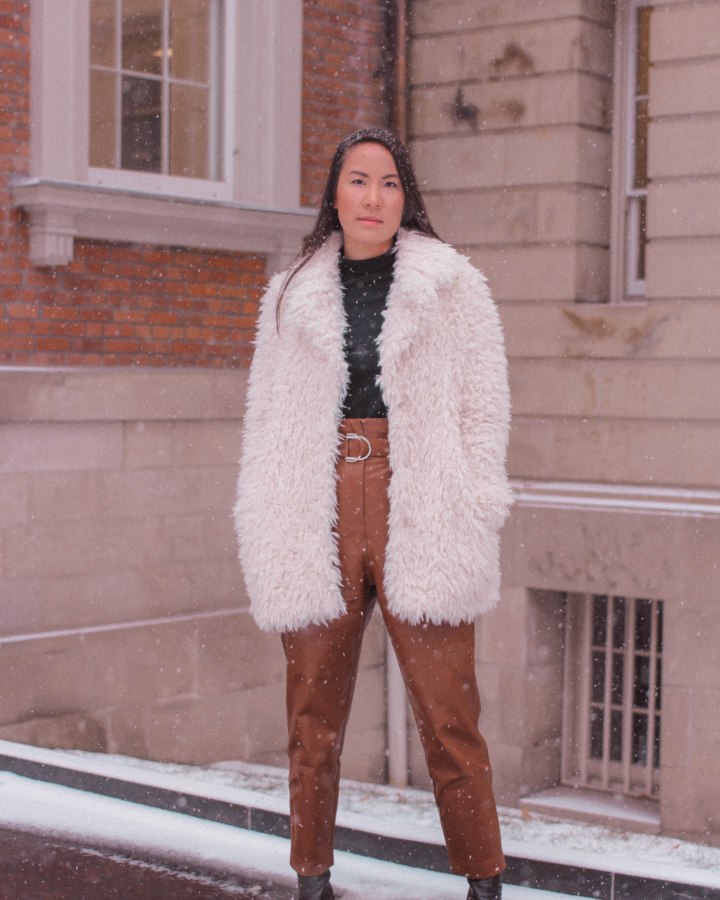 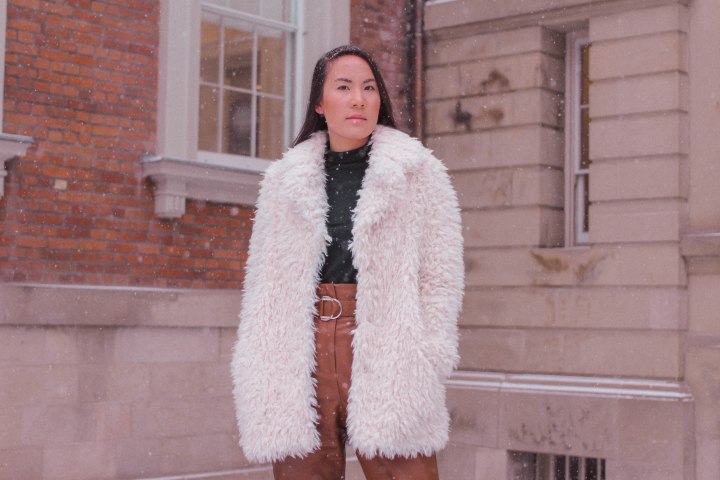 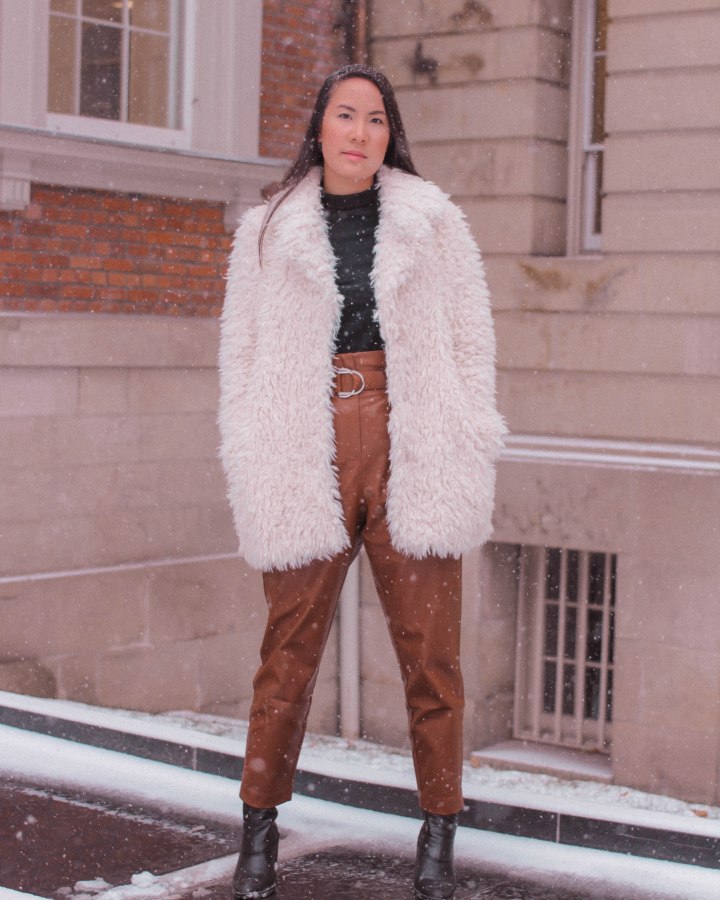 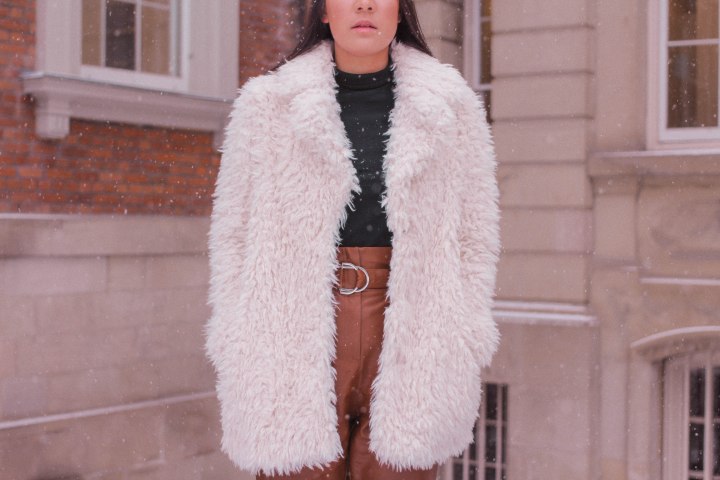 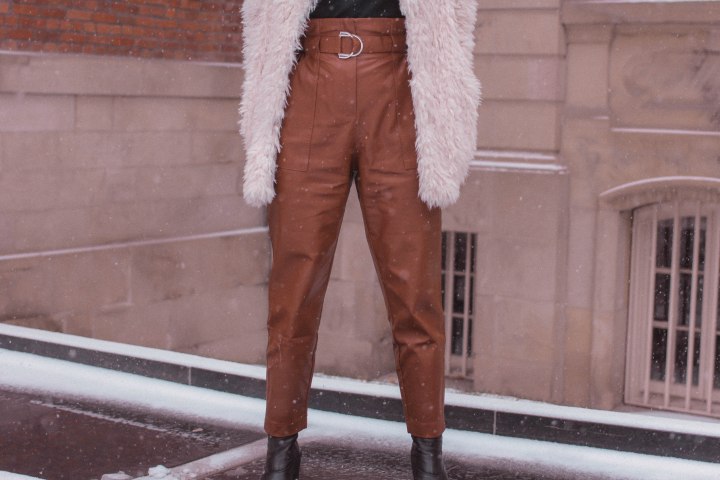 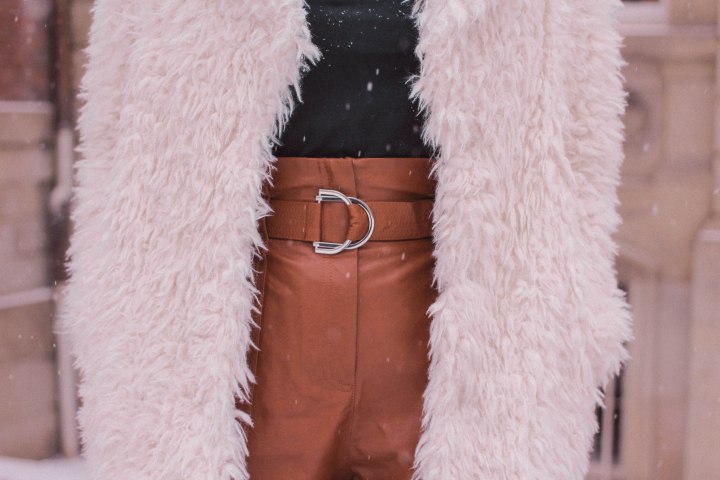 Alright so time to come clean… it’s not always all fun and games when I’m out trying to take pictures for my blog! In fact, a lot of the time, it’s all trial and error. Trying to get the right angle, the right lighting, the right background, right poses. etc. It is actually such a long process and I’m so thankful to have such a supportive and hard working boyfriend who’s always trying to make it work behind the camera. It’s especially hard when you live in Canada and you’re trying to take pictures outside in the middle of winter. Case in point: last weekend it was FREEZING out (and I am not exaggerating, it was actually -25 degrees Celsius outside) and we had to go out to get some pictures for my blog post this week. The location that I had planned to shoot in was downtown outside Osgoode Hall because I thought the beige and brown contrast of the brick colours on the buildings went perfectly with my brown and beige outfit. We had to walk a good 10 minutes in the freezing cold to get there while it was still snowing, and of course my choice of footwear was not appropriate for the weather. On top of that, my hair and fur coat were getting all wet and matted down. The direction I was facing was also opposite the direction the wind was blowing, so the snow kept blowing into my eyes making it so hard for me to see anything. We rushed to take these pictures in about 10 minutes, all the while our fingers and toes were so numb that we couldn’t even feel them anymore. Sounds glamorous, right? Well that’s just the reality of trying to shoot in the middle of winter in Canada!

Nonetheless, given the situation, I think we made the best of it and I think these pictures ended up turning out okay! I tried to dress as warm as I could and still look fashionable. I styled my outfit around these amazing brown faux leather paperbag waist trousers. I actually got these while I was in the UK. We happened to have some extra time on Boxing Day while we were in Liverpool because all the galleries/museums were closed due to the holiday. So what else do we do in that case? Go shopping of course! My mom and I wanted to hit up shops that we don’t have back home, so one of our first stops was River Island where the deals were crazy good! These pants caught my eye because of their colour (the brown obsession is clearly still going strong), but I wasn’t sure if they would be flattering on me. Since the dressing rooms were closed because of the massive sale, I stripped down in a corner of the store while my mom used my jacket to try and shield me so that I could try on these pants. I still wasn’t even sure if I loved them after putting them on, but when my mom told me how good they looked, I was sold. They fit so good in the waist and were also super comfortable, not to mention that they were over 50% off!!! I had to get them at this point. These pants are so high-fashion and unique, but they surprisingly look good with so many different tops and sweaters. I’ve linked them above in black (brown ones are sold out unfortunately).

Since the pants are such a statement piece on their own, I wanted to tone down the rest of my outfit so I opted for this simple black turtleneck. And because I had to stay warm outside, I knew I needed a nice big fur coat on top. So of course I reached for my fluffy white go-to coat of the moment (I also wore this in last week’s post HERE). I love brown and cream colours together, so this coat option was an obvious choice for me. Truth be told, if I wasn’t going to be taking pictures outside in this weather, I would have just thrown on my long down jacket, but that’s not very exciting to see, is it?

This past week wasn’t all about the gross, cold weather though. In fact, it was actually such an exciting week because we finally kicked off 2019 by going to our first concert of the year, and it was one that I had been looking forward to for a while. If you saw my Instagram stories, then you already knew that we had a blast at the KING PRINCESS concert! I’ve mentioned King Princess before in this blog post, but if you still haven’t heard of her,  you really need to get on it! I’m telling you, she’s going to be the next big thing and I think the fact that her Pussy is God tour is pretty much sold out in every city is very telling of that. Last week I also talked about festival lineup season, and King Princess is another artist that is extremely heavy on the festival circuit this summer. Pretty sure I’ve seen her on almost all lineups released so far, so she’s definitely an artist to get familiar with.

Now on to her concert! This tour was in support of her last single Pussy is God, and can I just say that this was one of the most fun concerts I’ve been to! It was full of positive, good vibes all around and of course extremely inclusive of everyone. The opener that she had was a local Toronto drag queen, Priyanka Love, and she really had everyone in the mood for a fun night! What a great start. King Princess was amazing live as well, but I already knew she would be because of all the live Youtube videos I watched of her to prep for this night haha. It’s always so sad when a concert ends and I have major post-concert depression for the rest of the week, and that’s exactly how this concert made me feel. However, nothing beats the feeling of living so completely in the moment, surrounded by people who love the same music as you all singing and dancing along to a great artist/band. It’s that feeling of being connected to others, to the performer, and to yourself that is so special at a concert. Here’s hoping that King Princess comes back to Toronto soon, and if you get a chance, you NEED to go check her out live!! Make sure to also check out her single Pussy is God below, and trust me, it’s a good one.  What a great first concert of the year to kick off a year of amazing music and shows! 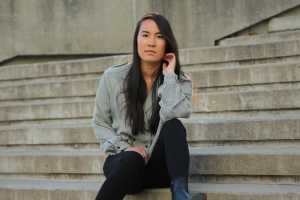 When it’s a holiday Monday 🙃 hope you all have a great start to your week!
Details from the tulip fields 🌷🤍🌸🌱
Frolicking through pretty flower fields are my favourite warm weather activity 🌷🌸💐🌷🌸💐
That finally friday feeling 😊 going on a fun little day trip tomorrow! What are everyone’s weekend plans?
We love a power suit moment 💕
Obsessed with all my new jewelry pieces from @evryjewels ✨ you can use the code IG30 to save on your order 💕

When it’s a holiday Monday 🙃 hope you all have a great start to your week!
Details from the tulip fields 🌷🤍🌸🌱
Frolicking through pretty flower fields are my favourite warm weather activity 🌷🌸💐🌷🌸💐
That finally friday feeling 😊 going on a fun little day trip tomorrow! What are everyone’s weekend plans?
We love a power suit moment 💕
Obsessed with all my new jewelry pieces from @evryjewels ✨ you can use the code IG30 to save on your order 💕
Loading Comments...