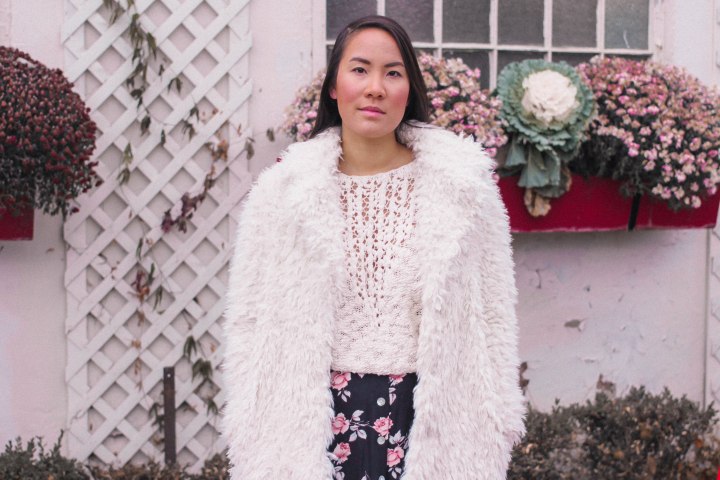 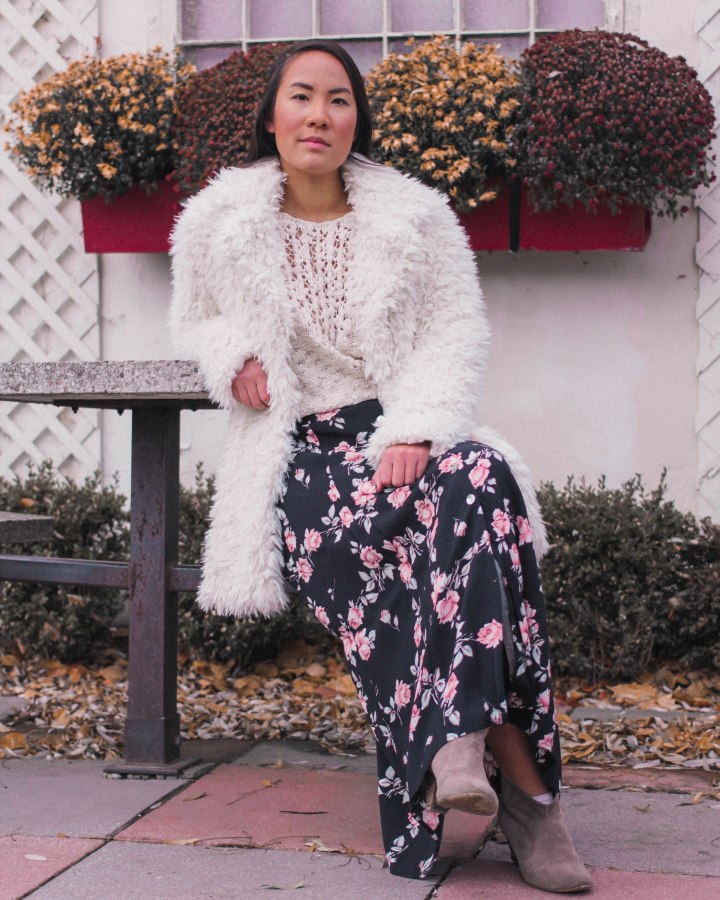 It’s been so incredibly cold here in Toronto lately that I literally just want to stay indoors in my PJs or sweats (who am I?!) and hibernate. And to be honest with you guys, now that the holiday season is over, I couldn’t care less about winter.. I just want summer to be here ASAP!! So to try and brighten up these cold, dark days, this week’s outfit is inspired by my summer style. Fingers crossed that it comes soon.

In the summer, I love wearing flowy, bohemian floral maxi dresses and skirts. This week I decided to wear one of my favourite vintage floral maxi skirts and winterize it. First step, throw on a super chunky sweater! I live in sweaters during this time of year. Usually I’ll just pair a sweater with high waisted jeans and call it a day, but sweaters with maxi skirts are so cute as well. The sweater that I’m wearing is from Free People a few years ago, and the bell sleeves totally go with the whole boho vibe of the outfit so I thought it was perfect. Of course if you’re in Canada, just wearing a sweater is never enough. We have mastered the art of layers, layers, and more layers! So here I’ve thrown on my fluffy white fur coat on top to add more warmth.  This jacket is so thick yet still flows nicely, so it works with the outfit, despite all the volume. If you wanted to layer even more for warmth, I would also wear leggings underneath this maxi skirt. You would never be able to tell since the skirt is so long, and it adds just an extra layer that you so desperately need.

Even though it’s so cold out right now, one thing that I do love about this time of year is that it’s officially festival lineup season!!!!!!!!!!! I feel like the anticipation and excitement of summer music festivals doesn’t fully kick in until the lineups are out, so that’s my fuel to get through the rest of the winter right now. Coachella, Governor’s Ball, Boston Calling, Firefly, Shaky Knees… all of these lineups are giving me life right now!

So of course, this week’s song has to be from an artist that I’ve noticed is quite heavy on the festival circuit so far this year. And to start it off with a bang, we’re going all out and featuring one that has catapulted to headliner status in 2019. Any guesses?!

If you said Tame Impala, ding ding ding! You are correct. To be honest, I was pretty surprised that Tame Impala had become so big to be considered a headliner at some of the biggest festivals including Coachella this year. Not that I’m complaining. In fact, I’m super happy for Kevin Parker and gang. It’s just that I remember seeing Tame Impala back in 2016 when they headlined Bestival in Toronto (it was a much smaller scale festival of only two days, and has since been cancelled in Toronto), and despite not having any new releases since that time, it’s amazing to see the growth to headliner status at these huge festivals! I’m sure most of you already know of Tame Impala, but if not and you’re heading to Coachella, Shaky Knees, or Boston Calling this year, definitely get on it! They are also playing several music festivals in Europe this year. On top of that, there are still several festival line ups to come out over the next few months and I’m positive we’ll be seeing more of Tame Impala on them.

Word is that they will also be releasing a new album this year which explains their heavy festival presence and I absolutely cannot wait! Their last album release was Currents in 2015 and it was hands down one of my favourite albums that year. Upon hearing the good news of their festival tours, I started listening to it again recently as well. I almost forgot how good this entire album is. Every single song is just pure magic.

But this week I decided to pick one from that album that I’ve resonated so strongly with since the beginning and I feel like others have as well. And that’s Yes I’m Changing. I remember listening to this song when it first came out and every single line of the song hit so close to home for me. The meaning of the song is pretty straightforward so take a listen to it below and let me know what you think!

If you’re planning to head to any festivals this year, let me know which ones and who you’re most excited to see!

☁️ GIVEAWAY TIME☁️
Big bag and an even bigger dress 🖤
More sunsets like this please 💖
Obsessed with my @elahandbags tote bag 🖤It makes the perfect work or weekend bag and the best part is that the lining is made from 100% recycled plastic bottles. This tote is launching in all new colours on April 8th, make sure to get yours!
New everyday bag from @tijnhomelife to take me into the long weekend. Hope everyone has a relaxing one! 🤍💖🤍💖
Happy hump day everyone 🤍 how’s your week going so far?

☁️ GIVEAWAY TIME☁️
Big bag and an even bigger dress 🖤
More sunsets like this please 💖
Obsessed with my @elahandbags tote bag 🖤It makes the perfect work or weekend bag and the best part is that the lining is made from 100% recycled plastic bottles. This tote is launching in all new colours on April 8th, make sure to get yours!
New everyday bag from @tijnhomelife to take me into the long weekend. Hope everyone has a relaxing one! 🤍💖🤍💖
Happy hump day everyone 🤍 how’s your week going so far?
Loading Comments...
Comment
×